Within the scientific profile the Chair realizes research within topics:

Results of the research conducted in Chair of Microeconomics cover broad range of publications: individual and collective monographies, papers in Journal „Social Inequalities and Economic Growth” as well as in some other scientific journals and conference proceedings issued in Poland and abroad. 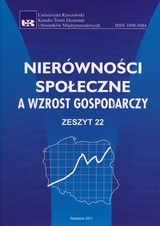 We use cookies as part of the Site. By using the Site without changing your cookie settings, you consent to the storage or use of cookies. Polityka prywatności